Diablo Ballet will turn 25 years old in March, 2019. From now until that auspices date, there will be periodic blog posts taking you from the very beginning, when this incredible company was a mere idea, to the gala celebrating this remarkable accomplishment.

At the Beginning…
Once upon a time, in a small suburban community, there was a fair maiden, a kind and generous fairy godfather/mentor, a dream that came true and a happily ever after. (Fortunately, there was no villain or evil stepmother, although there likely were some naysayers.) Taking a few liberties, we all know that’s the basic premise of most fairy tales. Diablo Ballet is one of those fairy tales….only it’s real. The fair maiden is, of course, the much loved Lauren Jonas, co-founder and artistic director; Ashraf (Ash) Habibullah is the very kind and generous mentor. The happily ever after will be, in 2019, 25 years old. In today’s world of failing arts organizations and broken dreams, this silver anniversary is an accomplishment that can’t be applauded enough.

It was 1992. A gallon of gas cost $1.05; the top song was Whitney Houston’s “I Will Always Love You”; the biggest movies included Aladdin and Batman Returns; and MTV introduced The Real World reality TV show. Lauren, who had been dancing with the Southwest Ballet Company in New Mexico prior to its shutting down, returned to her Bay Area home and was teaching ballet and guest dancing with local companies.

Lauren was teaching an open ballet class in Berkeley. Ash, who had founded his own tech company years earlier and is a true renaissance man who strongly believes in the arts, was taking jazz lessons. “It was suggested that I take a ballet class because it would improve my jazz,” Ash remembers. So he did. And as luck would have it, Lauren was his teacher. At the same time, Ash was pursuing photography as a hobby and was doing a lot of dance photography. Ash, the student, asked Lauren, his teacher, if she’d like some dance shots; she, of course, said yes. “All professional dancers need dance shots and they are typically very expensive,” Lauren said. She brought some other dancers with her on the day of the shoot. It was a win-win (obviously, in more ways than one). Ash got more experience photographing dancers and the dancers, in return, got beautiful — and free — photos

Lauren and Ash soon became more than teacher-student; they became good friends. Attending a performance together, watching dancers from the Moscow Ballet at Walnut Creek’s recently opened Lesher Center, Lauren and Ash saw how excited the suburban audience was to enjoy professional dancers in their own neighborhood. They didn’t have to travel to San Francisco; they could actually experience beauty and culture close to home. So Lauren and Ash started talking: wouldn’t it be wonderful to have a professional ballet company here in the suburbs. 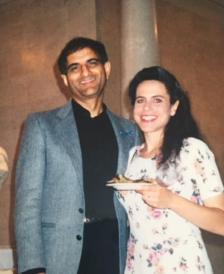 The idea was cast. The talks continued. The dream was about to take flight. Lauren brought in other professionals from the dance world to help formulate ideas: Lawrence Pech, at the time, a principal dancer with the SF Ballet; and Sally Streets, founder of the Berkeley Ballet Theatre and a mentor to Lauren. Ash provided seed money. He talked with Walnut Creek’s mayor, who was very supportive and offered some financial help from the city. “With no years behind you,” Lauren explained, “you aren’t able to apply for grants. It’s really hard to raise funds.” Paperwork to create a non-profit organization was filed. A small Board of Directors was formed. Potential names were tossed around. “We knew if the company was going to be embraced by the community, we’d need a name associated with the area,” Lauren noted and Diablo Ballet was created! A dream was becoming a reality. But it would be more than a year before Diablo Ballet made its debut.

Watch this space. In coming weeks, we’ll tell you about that very first performance — and many more details about this amazing company.