Dance Notes: From Another Time 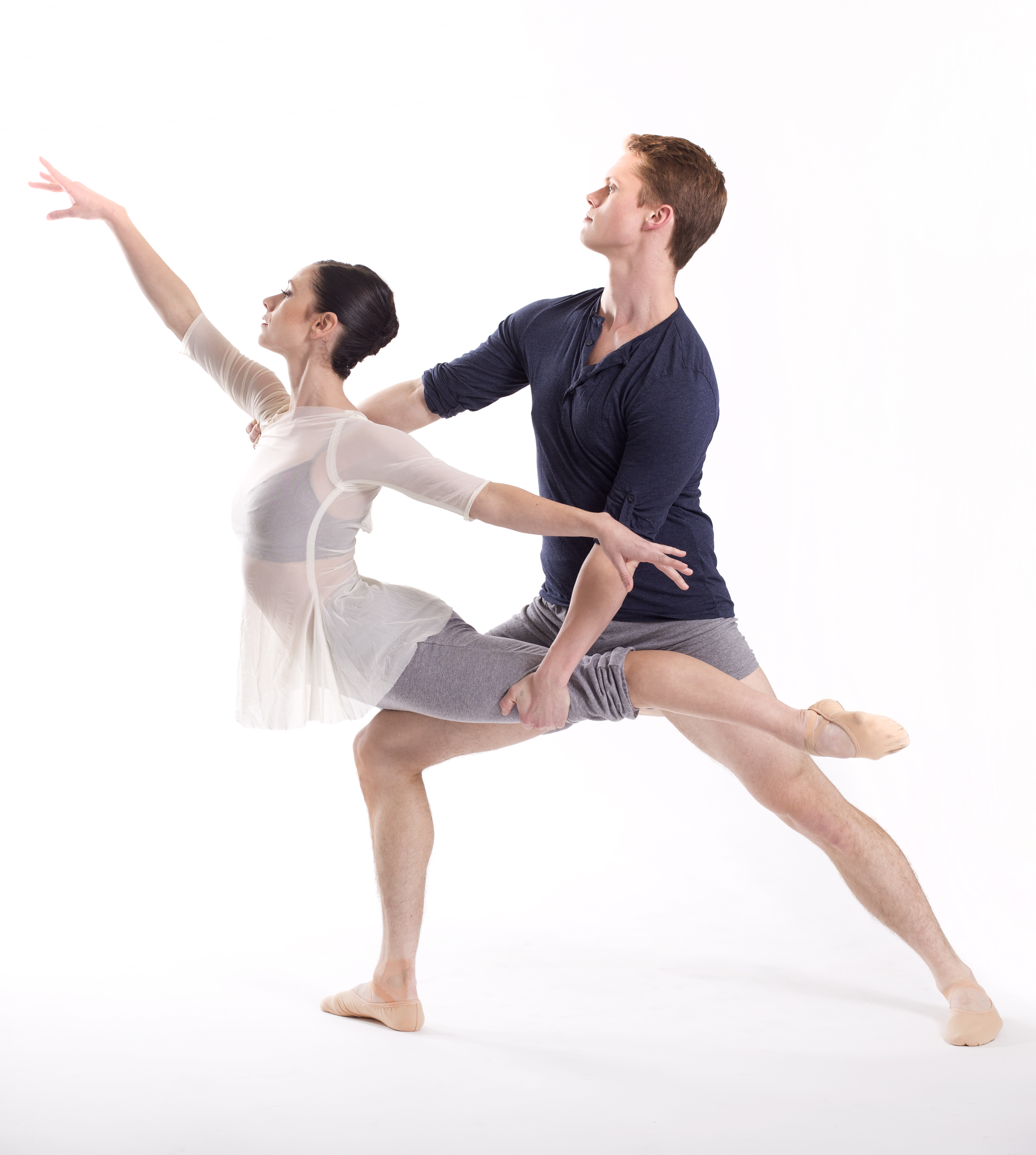 Justin Levitt is doing exactly what he has wanted to do since he was a young boy; Tina Kay Bohnstedt, on the other hand, had no interest in dancing and only took it up at the insistence of her mother.

Amazingly, Justin has never actually taken piano lessons. When he was about 7 years old, his mother suggested he try them. After one or two lessons, he says, “I declared that I hated the piano.” In high school he started listening to the instrument differently. “I heard some pop songs with cool piano intros, and noticed some of my favorite movies had beautiful piano scores and suddenly, I fell in love with it,” he notes. And composing, which he says “just kinda happened…helped establish who I am, gave me my voice” and, he admits, got him through some difficult times.

Interestingly, Justin reports, in the beginning he couldn’t actually write musical notes because he didn’t know them. “So I would just write the letters of the notes rather than the notes themselves. The first year of my writing is just letters on paper,” he laughingly recalls. 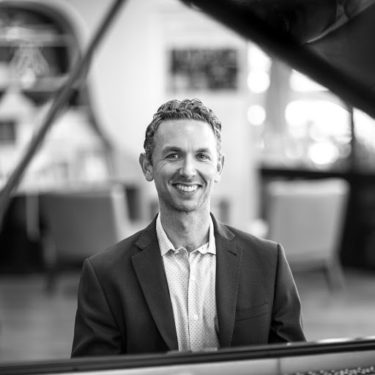 From Another Time was written in 2008. “The melody just came to me one day,” Justin reports. He acknowledged that rarely, when composing, does he get any kind of visual picture in his mind. “Most of the time, I just feel it, I feel the emotions and the sounds of the music and that’s what pulls me forward to determine the next note.” he says. “But this particular piece was different because it’s the first time I actually saw imagery. It made me think of Russia over a hundred years ago – old and cold – from another time.”

Justin refers to From Another Time as one of his all-time favorite pieces. “It’s very much like a story,” he explains. “There’s an intro, then the piece opens into a waltz and goes on a musical journey from there.” He says it’s a story that he could never fully tell in words.

Diablo Ballet first performed this ballet in 2013; Justin played the music for Lauren who agreed that it was a beautiful piece for dancing; she sent it to Diablo Ballet alum and choreographer Tina Kay Bohnstedt, who also liked it very much.

“I thought it was very sweet, delicate, humble and kind,” Tina recalls.

Justin admits that “this is one of the most special things that can happen for a composer. It was so exciting when Lauren and Tina selected this piece. Playing the piano while the dancers perform, that’s a whole other thing. Writing a piece of music and performing it, that’s a big deal,” Justin says. “But performing it with a ballet company, especially one as good as Diablo Ballet, well, that’s just beyond incredible.” 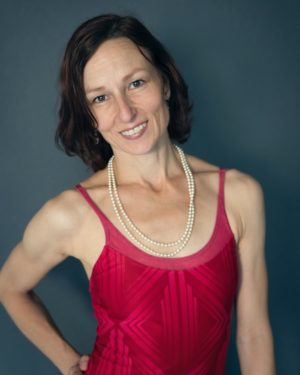 Tina Kay Bohnstedt
As a young girl, Tina Bohnstedt grew up in the circus – Munich’s Circus Krone to be exact, one of the largest circuses in Europe; she thought she’d follow in her mother’s’ footsteps and become a trapeze artist. At her mother’s insistence, “because she said it would look good on the trapeze,” Tina, who admits to having “zero interest” in dance, began taking ballet lessons from one of the circus dancers. Displaying an obvious talent, Tina stayed with it, attending Munich’s Heinz-Bosl Stiftung Ballet Academy starting at 11 years old. At 18, she joined the Bavarian State Ballet, a large (80 dancers), prestigious company where she quickly became a principal dancer and where she was recognized with the Bavarian Cultural Award for Outstanding Achievement in the Arts.

Ten years later and believing it was time to take a break from ballet, she moved to California. Realizing that she missed dancing, Tina, at the suggestion of a friend, auditioned for Diablo Ballet which, at the time, had no openings. As luck would have it, one of the dancers got pregnant and Tina was in, serving as a principal dancer with Diablo Ballet for the next 11 years. 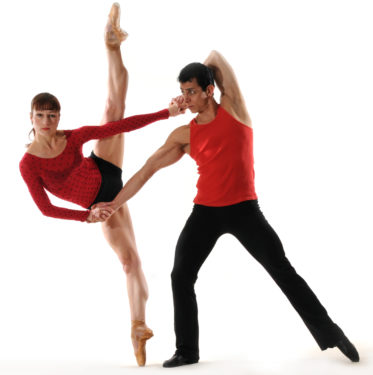 Tina Kay Bohnstedt and David Fonnegra
After numerous injuries and three knee surgeries, Tina knew it really was time to stop dancing. She accepted the position of ballet mistress for the Houston Ballet and thereafter taught master classes before taking over a private studio from a friend for two years. Tina now serves as the Ballet Mistress for Houston’s VITACCA Vocational School for Dance.

Back in 2013, when she first heard Justin’s beautiful composition, From Another Time, “I was able to really get in touch with the piece,” Tina says. Her process includes listening to the music, developing a story and then creating a dance. Often reluctant to reveal the story she conjures up, Tina finds it interesting to discover what the audience sees and how it touches them. “For me, from another time could be whatever happens after. We could be in a dream state, on a cloud. We’re all neutral. Whatever masks we had on, we all end up being soft, sweet, gentle and in the same place.”

The costumes she designed to go with the ballet are “unpretentious, simple, clear, neutral,” Tina notes. “More like we’re all one and we’ll all go to the same place in the end.” 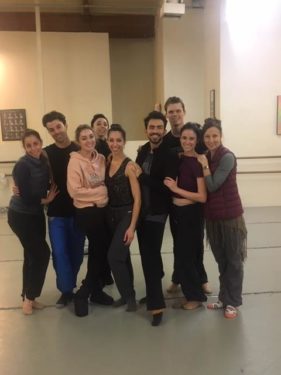 Tina Bohnstedt with the Diablo Ballet dancers
Introduced to Diablo Ballet audiences in 2013, From Another Time was described by huffpost.com as a “mysterious, absorbing glimpse into a dream world, set to (Justin Levitt’s) plaintive piano score…there was a sense of foreboding throughout the piece and the suggestion of the fragility of human bonds.”