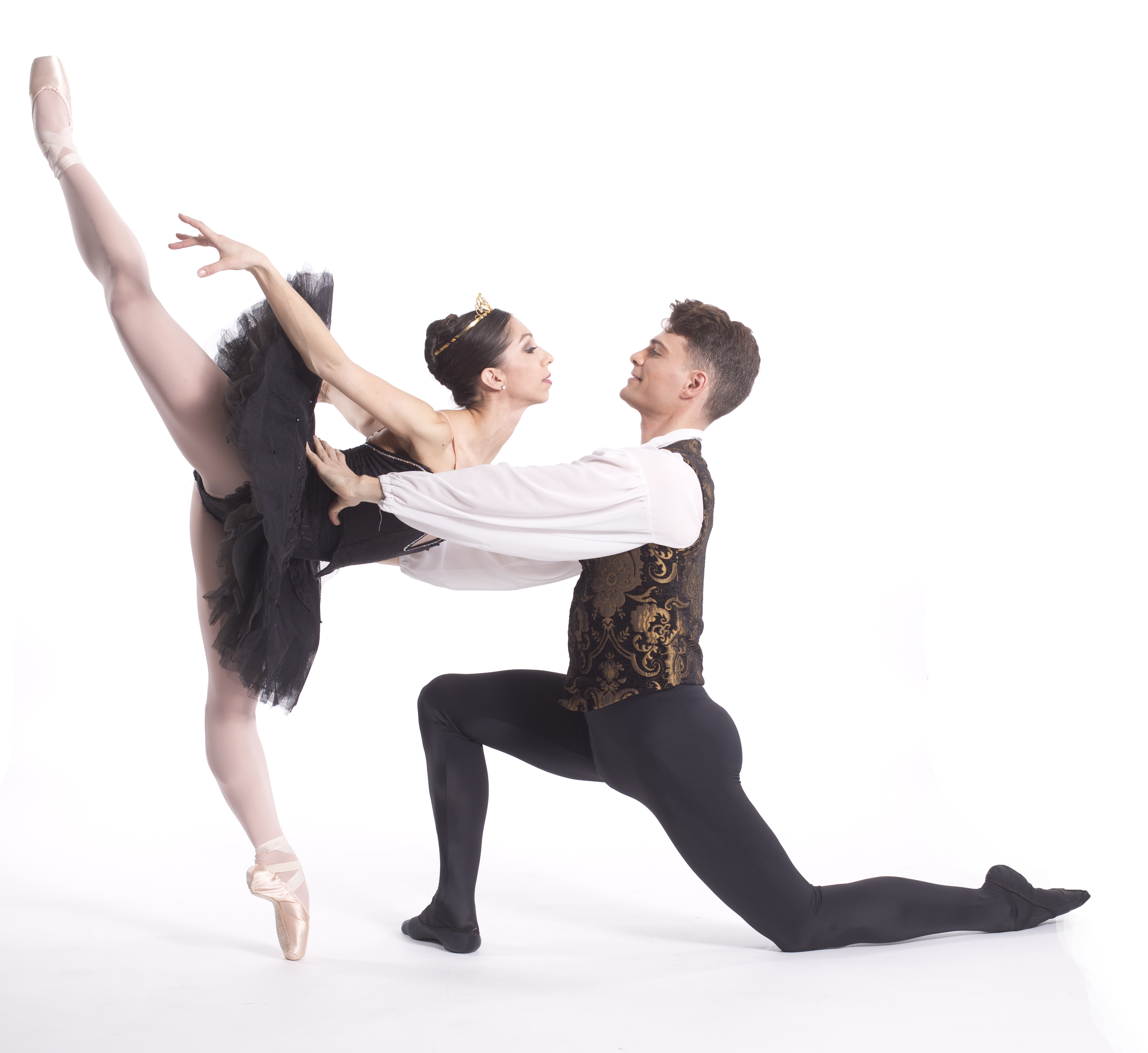 Black Swan Pas de deux, White Swan Pas de deux and Coda and Variations. A few definitions you may find useful: a Pas de deux (French for “step of two”) is a duet in which two dancers, typically a male and female, perform ballet steps together. The Pas de deux is characteristic of classical ballet. Variations are where the dancers separate and each dancer, takes center stage and performs a solo dance. Typically, variations are intended to showcase leaps and turns, as well as the skills and athleticism of the individual dancers. Coda (literally “tall”) is the concluding segment and generally ends during a grand musical climax.

Staged by Company Regisseur, Joanna Berman, this classic Swan Lake ballet, composed by Tchaikovsky, made its debut in 1877 by the Bolshoi Ballet. Apparently, according to Wikipedia, it was a failure. Many critics considered it to be too complicated for ballet, too noisy and too symphonic; some also found the choreography to be “unimaginative and unmemorable.”

In the early 1890’s, choreographer Marius Petipa was considering the possibility of reviving Swan Lake. However, Tchaikovsky passed away just when these plans were beginning to come to fruition. Riccardo Drigo modified the score while Petipa altered the dancing. In 1895, this revised Swan Lake was performed by the Imperial Ballet; most ballet companies base their stagings on this version. It continues to thrill audiences with romance, drama, tragedy and exquisite score.

The Black Swan Pas de deux is considered one of ballet’s most iconic moments. According to the Royal Opera House website, “The duet is an iconic moment from a ballet that has come to define the art form. The duet is remarkable for its powerfully dramatic choreography and music…and is deceptively challenging…” 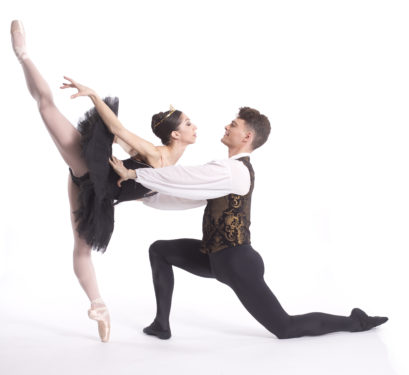 This is an encore presentation of Swan Lake Suite; Joanna Berman staged it last year for Diablo Ballet and critics commented that it ended the program on a high note and that “Berman’s adapted staging turns the Black Swan Pas de deux Coda into an ensemble variation, which worked great…”

Mrs. Berman danced with the San Francisco Ballet for 19 years; 14 of those were spent as a principal dancer (and she starred in Swan Lake, amongst numerous other classic ballets). The San Francisco Chronicle once described her as “having an acute sense of drama, articulation of movement and transparent joy in dancing.” Once she retired from dancing, Berman became a ballet teacher, ballet mistress and regisseur. She once told an interviewer that “Being a regisseur resonates almost as much as dancing for me. I love it…it doesn’t have the same pressures as being a performer and I still get to interact with dancers and use my body…” When dancing classic ballets, choreographed hundreds of years ago like Swan Lake, Berman said that dancers just know what to do. “If you’re a professional ballet dancer, you just know the steps of the traditional versions. It’s in the collective consciousness of the classical ballet world,” she noted. 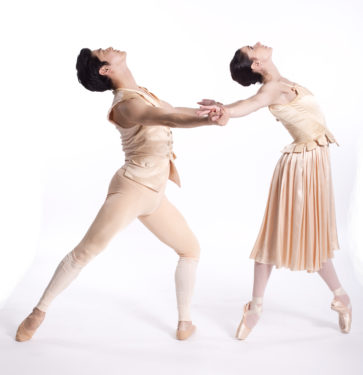 Dancer and choreographer Val Caniparoli created the romantic Tryst in 1991 for the San Francisco Ballet’s ballerina Evelyn Cisneros for Mozart’s Bicentennial Celebration. The ballet is set to the beautiful music of Wolfgang Amadeus Mozart and Lauren Jonas said that she is “so honored to have Tryst performed at the close of our 25th Season.” Caniparoli has worked on more than 100 productions for ballet, opera and theater for over 50 companies. He began his career as a dancer with the San Francisco Ballet in 1973 and was appointed resident choreographer in the mid-1980’s; he continues to choreograph for the company as well as perform as a principal character dancer.

Caniparoli is one of the most sought after American choreographers and has been referred to as a “ballet choreographer, using ballet lines and vocabulary, but making movements very current.” His work has also been described as “rooted in classicism but influenced by all forms of movement: modern dance, ethnic dance, social dancing, even ice skating.” The San Francisco Chronicle once wrote that “One of the virtues of Caniparoli’s choreography is that it flatters the dancers…” and the Cincinnati Enquirer called him the “best choreographer to visit Cincinnati in a long time…” 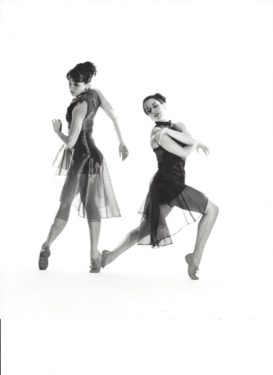 Corinne and Lauren Jonas in the original Walk before Talk. Photo by Ashraf.

Walk before Talk was created for Diablo Ballet in 1998 by KT Nelson, Co-Artistic Director of ODC/Dance, using music of Michael Nyman, one of Britain’s most innovative and celebrated composers of minimalist music and known for numerous film scores and operas.

Nelson didn’t necessarily plan on being a choreographer. In 1976, Nelson, then a student at Oberlin College in Ohio and apparently happily into her hippie phase, joined a dance collective. It was a logical decision: For several years, she had been friends with the group, which included Brenda Way, a college lecturer. Later that year, members of the group piled into a yellow school bus and headed west, setting their sights on San Francisco.

That collective morphed into ODC/Dance, one of San Francisco’s most prominent contemporary dance companies. Her dances, according to the San Francisco Chronicle, are unpredictable in style, tone and theme, and she has won a large following among dance audiences.

In 1986, Nelson choreographed and directed ODC’s first full-length family ballet – The Velveteen Rabbit; this has since become a popular annual holiday production for the company.

Nelson once said she’s interested in making works that examine contrasting energy lines and visual imagery. She also told an interviewer that she believes “art has the capacity to make a person pause and question.” She has received the prestigious Isadora Duncan Dance Award four times, two of which were for outstanding choreography. 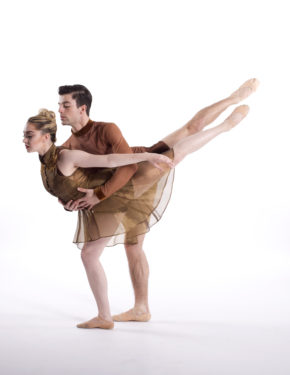 When asked during an interview to describe contemporary dance, Nelson suggested it has been significantly influenced by the ballet world. “Ballet has had a set vocabulary for several hundred years” and while choreographers may have interpreted the language differently, it’s still the same vocabulary. Today “the ballet world is reimagining what the body can say,” she explained. “As an older choreographer, I’m trying very hard to not express in the mode I grew up in, but to understand what is relevant today without giving up who I am. I grew up in a different time, but I want to partake in this new conversation. I’m not thinking about what I’ve done, but how my voice can be here and now.”

When Walk before Talk premiered 21 years ago, critics called Nelson’s ballet “delightful,” noting that it showcased the company “at its best.” The San Francisco Chronicle called the piece “exhilarating” and said it proved what a powerful choreographer Nelson can be “when she embraces sheer musicality.” She said “This work is about finding the sensual and lyrical quality of the male dancers while allowing the women to be both frail and facilitators.” It’s high energy, athletic and sheer fun.

As we conclude this, our 25th Season, we thank you again for your support. We look forward to seeing you in November, when we bring you another season of diverse, inspiring and beautiful performances.