Dance Notes: A Swingin’ Holiday and The Nutcracker Suite 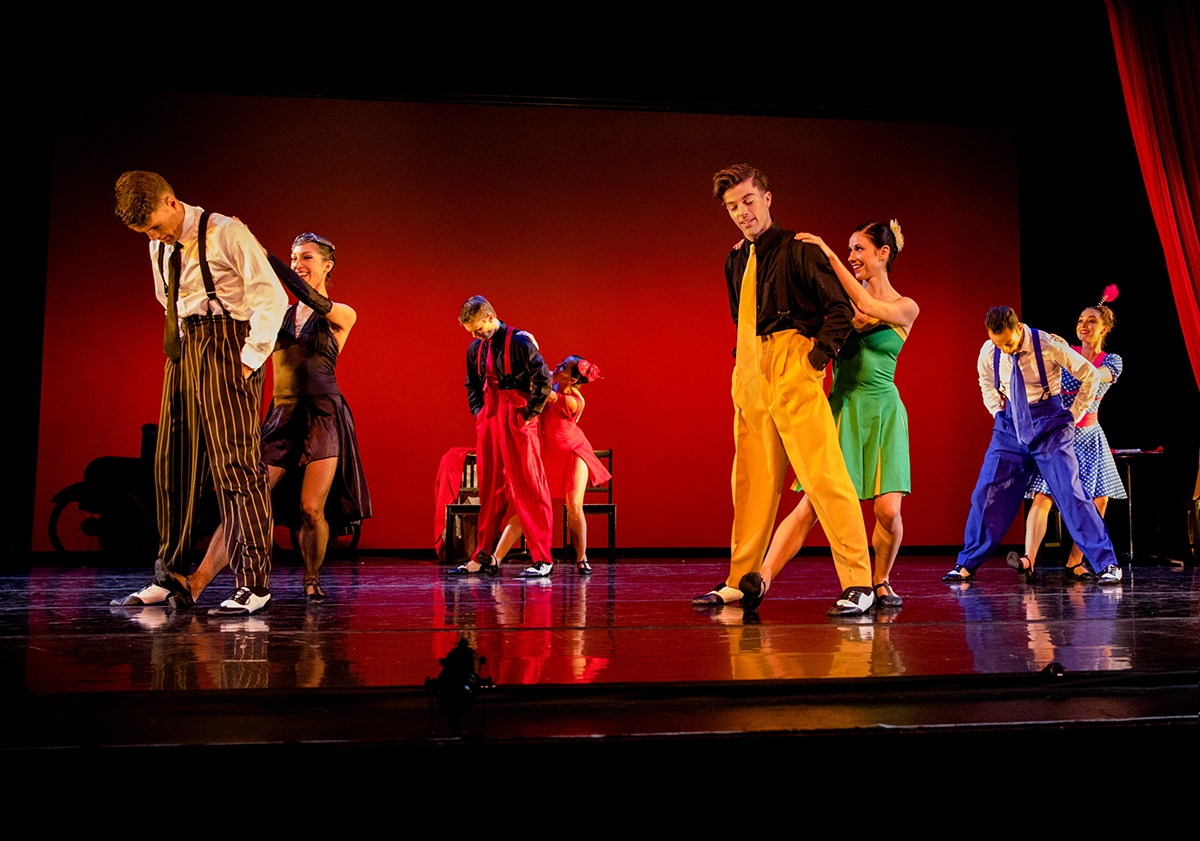 Each year, the holiday season kicks off with aromas of cinnamon, nutmeg, and gingerbread. Houses are decked with holiday decorations and lit up with festive twinkling lights; visions of sugar plums and snowflakes dance in the minds of those awaiting the arrival of Old St. Nick. Diablo Ballet also has its traditions to spark the holiday spirit with the season opener, A Swingin’ Holiday & More, a perennial favorite since it premiered in 2012. 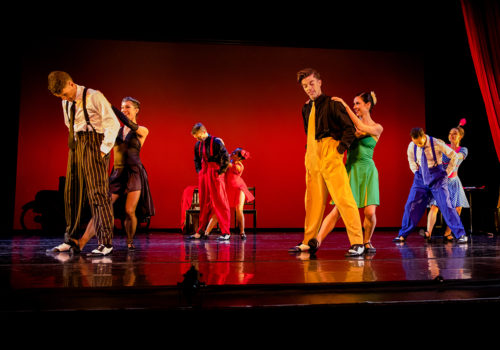 Diablo Ballet performing A Swingin’ Holiday in 2018.
Photo by: Bilha Sperling.
Created by Broadway choreographer Sean Kelly, something new is added each year to mix it up a bit — a part of the music might be different, or perhaps some new dancers bringing a different vibe, or the substitution of one segment for another. This year, Kelly has added in a female solo, and continues to reexplore choreographic ideas that complement the dancers’ talents. There are also two new upbeat songs from the Big Band era that will be performed by the live 16-piece Diablo Ballet Swing Orchestra.

Kelly acknowledges that going from classical ballet to swing dancing is not easy. “It requires quite a bit of focus, and being open to stylistic and technique changes because I had been so well-trained classically swing dance is much more collaborative”, he remembered. “There’s a lead and follow, but if you don’t have a proper connection, it can look artificial. It required a lot of growth.” 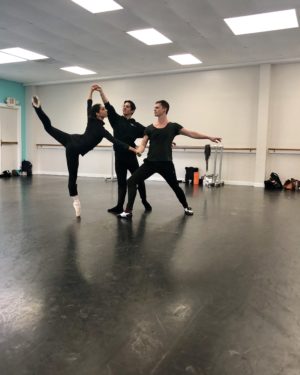 Amanda Farris, Roberto Vega-Ortiz and
Michael Wells rehearsing A Swingin’ Holiday.
Kelly, who has most recently completed a two-year stint as Associate Choreographer & Resident Director for the national tour of An American in Paris, is just getting ready to take the touring company back out to Paris for the holidays. Over the years, A Swingin’ Holiday has been highly praised. A 2012 CA Literary Review stated, “The dancing in A Swingin’ Holiday was fresh and spirited…with razzle-dazzle..” Culture Vulture said, “…16 musicians on stage added big sound to the cut-loose choreography and registered pure joy.” And last year, Critical Dance wrote, “A Swingin’ Holiday proved once again to be a whimsical and endearing annual tradition…a sprightly and spry review with its brightly colored costumes, lively accompaniment, and playful choreography, this piece continues to be a surefire way to mark the beginning of the holiday season.”

So sit back, enjoy the exhilarating music, the fabulous dancing, and let the holiday season begin. 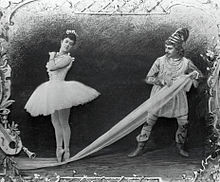 The original production of The Nutcracker, 1892
The Nutcracker is as synonymous with the holiday season as carved pumpkins have become a symbol of Halloween. Since the ballet first premiered in St. Petersburg on December 18, 1892, the two-act production has been a staple of holiday traditions around the world. Originally commissioned by the director of the Russian Imperial Theatre, based on E.T.A. Hoffmann’s sinister fairy tale intended for adults — The Nutcracker and the Mouse King — choreographer Marius Petipa used the adapted version The Tale of the Nutcracker by Alexandre Dumas for Tchaikovsky to compose the music for the ballet.

It usually offers a dream of Christmas past, the enchanting story often follows young Clara on Christmas Eve, who is given a special toy nutcracker by her strange Uncle Drosselmeyer. As the story unfolds, the toy magically transforms into a prince and fights off an army of rats and the villainous Mouse King before he whisks Clara off on an adventure through the land of snow and kingdom of sweets, where she is thanked and greeted by the Sugar Plum Fairy. There is a dazzling array of dances performed by Spanish, Russian, Arabian, and Chinese dancers, and the Waltz of the Flowers celebrating the defeat of the Mouse King. The celebration winds down with a final pas-de-deux dance by the Sugar Plum Fairy and the Cavalier before Clara wakes up the next morning under the Christmas tree with her toy Nutcracker next to her. She is left wondering if her incredible journey was real or all a dream.

When Diablo Ballet Artistic Director Lauren Jonas commissioned renowned choreographer Julia Adam to create a companion holiday program for A Swingin’ Holiday that would resonate with the audience, they settled on The Nutcracker Suite — an abbreviated 25-minute version of the full two-act ballet. For Adam, it was an opportunity to blend tradition with innovation, classical, and modern twist to a favorite holiday story ballet. Adam, a former principal dancer with San Francisco Ballet and master choreographer both in the US and Canada with companies such as San Francisco Ballet and the National Ballet of Canada, thought what better way to bring the arts to the community then capturing the magic of local venues and characters. 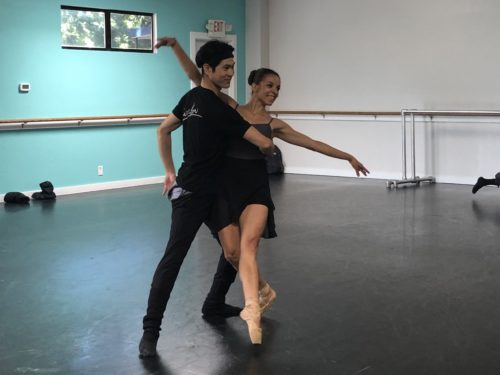 Dajana Klos and Donghoon Lee rehearsing
The Nutcracker Suite.
“It’s so wonderful to work with such a beloved company as Diablo Ballet, right in my backyard, that’s part of my community, said Adam. I am familiar with the dancers having most recently worked with them on Once Upon a Time so it’s lovely to work efficiently with relationships that I’m familiar with.”

For her inspiration, Adam drew from being a Bay Area resident for the last 30 years. She had an idea of playing with a part of the title “Suite” to create a sense of community having a relationship to the arts. She thought it would be amusing for the characters to check into a suite at a hotel, which made her think of the iconic Fairmont Hotel in San Francisco. Since she has an affinity for mid-century 50’s designs, she set the storyline in a retro-modern reimagining to work theatrically with A Swingin’ Holiday.

The story unfolds when the Diablo family checks into the Nutcracker Suite on Christmas Eve as various characters in the program begin to parallel the characters from the full-length version. Modeled after Drosselmeyer is the concierge, a bellhop transforms into the Nutcracker, Fritz is the rat king, Mr. and Mrs. Diablo become the Sugar Plum Fairy and the Cavalier; and the aunt turns into the Snow Queen as hotel maids dance various parts from the Kingdom of Sweets.

“The version I’m creating is similar to The Wizard of Oz. It’s as if being in a dream-like state before going back to reality; because when we dream, the people in our lives become part of it; we make the players because they are familiar to us”, said Adam. 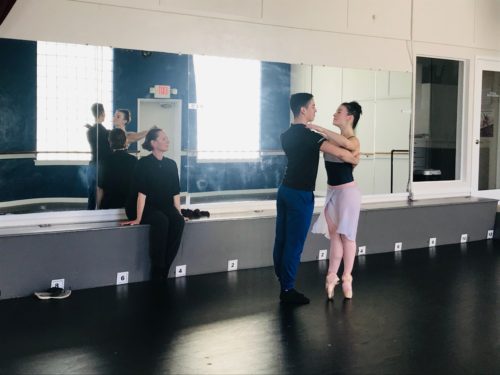 Julia Adam rehearsing with Roberto Vega-Ortiz and
Olivia Powell in The Nutcracker Suite.
Photo by: Rosselyn Ramirez.
Regardless of the style and version, the various productions of The Nutcracker danced by professional companies all over the globe set the scene and tone that shape the holiday season. And there is no doubt Adam’s imaginative twist on the holiday classic tale will ignite the spark that spreads holiday cheer, adding to the list of must-see holiday shows for all ages.