How A Champion Dancer Brought An Animated Classic To Life 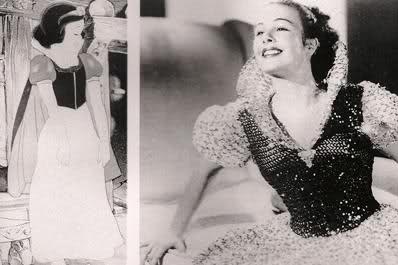 Ballerinas often star in works based on fairy tales. But how many actually get to be the inspiration for a legendary film fairy tale character?  Dancer Marge Champion got to do just that. The shame is, many of us don’t know.

Not only was Marge, along with husband & legendary Broadway choreographer Gower Champion, two of the world’s greatest dancers. Marge was also the inspiration for Snow White.

In 1933, a Disney talent scout came to her father Ernest Belcher’s ballet studio in Los Angeles, where he trained such stars as Shirley Temple, Cyd Charisse, and Gwen Verdon. The scout selected three students who auditioned to be the live-action model for a Disney animated film. After they saw over 300 girls, Marge got the job. The animators would use her actions for everything from Snow White picking daisies to eating that poison apple. All for the enormous sum of $10 a day.

Marge impressed Mr. Disney so much that he used for a few other of his cartoon creations – the Blue Fairy in Pinocchio, and even the dancing hippo in Fantastia.

The CBS Early Show caught up with the still dancing Marge not too long ago. Take a look at some amazing footage of how a fairy tale became reality. http://www.youtube.com/watch?v=Hjt13WdEkZc

Dan Meagher is the Director of Marketing for Diablo Ballet