The Enduring Allure of Swan Lake 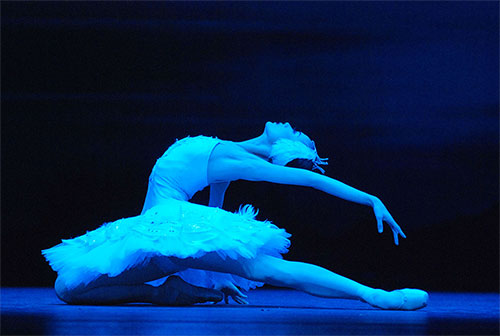 It’s been said that Swan Lake is a must see for any balletomane, but I’ll venture to say it’s a must see for newcomers to dance as well. In addition to its elegance and beauty, it’s got some serious elements of intrigue: a flawed prince, an enchanted swan, ill-fated love, and my personal favorite, a lake full of tears. Not to be overlooked are its rich history, and the breadth of artistry that has made it one of the most beloved ballets of all time.

Swan Lake was Tchaikovsky’s first ballet, and is now considered one of his most

valuable works. It wasn’t always deemed so; his original composition was thought by critics to be too complex for a ballet. The first production of Swan Lake by the Bolshoi Ballet premiered in 1877, and was anything but a success, if not an outright flop. It wasn’t until the Imperial Ballet (today the Kirov Ballet in St. Petersburg) staged a revival in 1895 (choreographed by Lev Ivanov and Marius Petipa) that Swan Lake became a Russian triumph. Its acclaim spread even farther in 1907, when an abridged version of the Ballet left Russia to tour Northern Europe with Anna Pavlova.

From classical to contemporary, Swan Lake is currently produced by ballet companies the world over, and there are as many different versions of the narrative as there are adaptations to Ivanov’s and Petipa’s original choreography. A traditional interpretation usually unfolds as follows….

While hunting near a lake, Prince Siegfried is poised to shoot a swan, who then transforms herself into Odette, a virginal and pure maiden. She explains to him that only his love can break the spell condemning her to life as a swan, cast upon her by the evil magician, Von Rothbart. The two fall madly in love but alas, before Siegfried can officially declare his love for Odette, he is tricked and seduced by her evil twin, Odile, and declares his love to her (the Black Swan), by mistake.

In the Ivanov-Petipa version, Odette is so hopeless that she throws herself into the lake and drowns. She is followed by Siegfried who is equally devastated by his mistake, and the two are reunited in a heavenly apotheosis. This ending was too religious for 20th century communist Russians however, so they changed it to something more in tune with their politics: Siegfried kills Von Rothbart thereby becoming a victor over oppression rather than a victim of fate.

An entirely new version of Swan Lake was staged by Rudolph Nureyev as director of the Paris Opera Ballet. At first the French dancers were so averse to his radical departure from tradition that they refused to practice a step of it for an entire two weeks. In Nureyev’s adaptation, the male dancer was assigned an unprecedented major role. By giving him a solo, and changing the pas de deux in the fourth act to a pas de trois (with two male dancers), Nureyev elevated the male dancer out of his role as anonymous partner to the lead ballerina and thus began his profound contribution to classical ballet: the male dancer becoming the equal of the female.

Many female dancers dream of landing the lead role in Swan Lake because of its extreme technical and emotional difficulty. One of the role’s trademarks is a series of thirty- two consecutive whipping fouettées (a type of turn on one leg) that is performed by Odile as she dazzles and deceives Siegfried in the Black Swan Pas de Deux. Although now an iconic part of the ballet, this exhausting and extremely difficult element was only included in the original work because Petipa’s lead ballerina, Pierina Legnani, was known for fouettée turns, and audiences demanded to see this whenever she performed.

s the subject of Darren Aronofsky’s film, Black Swan. It stars Natalie Portman who plays a dancer in the corps de ballet driven to a breakdown as she vies for the much coveted role of Odette & Odile. Criticized by some for perpetuating stereotypes of the ballet world (over-bearing mothers, sexual harassment of dancers by directors, eating disorders, etc), the film is still an inarguable thriller. Even better, it generated much interest in ballet as dance companies worldwide saw Swan Lake ticket sales increase dramatically after its release.

Swan Lake is undoubtedly here to stay. From the Bolshoi Theatre in Moscow to the Academy Awards in Hollywood, what’s next for this classical masterpiece?