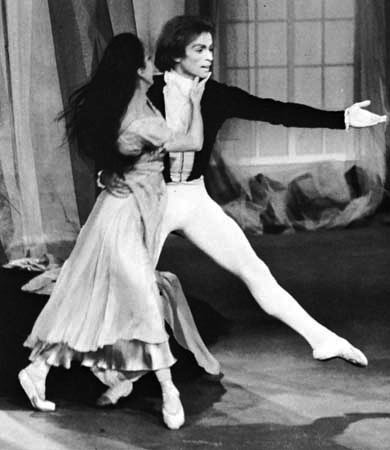 I’ve heard the term “pas de deux” many times; I’ve even used it a few times now that I’m becoming more familiar with ballet. But I’m not sure I knew exactly what it meant.

The French term pas de deux literally means “step of two.” Used predominantly in ballet, it’s a “duet in which ballet steps are performed together, portraying an expression of feelings and thoughts between two dancers.”

A pas de deux, which is characteristic of classical ballet, usually consists of an entrée (introduction), adagio (slow dance performed together by both dancers), two variations (a solo for each dancer), and a coda (finale with both partners dancing together to display their virtuosity). The couple must strive to move in complete unison, each flowing effortlessly to the music.

Wikipidea.org states that sometimes the term pas de deux is applied to a dance for two, whether it is in strict classical form or not. By this definition, any dance for two people is automatically a pas de deux, though many lovers of classical ballet may strongly disagree.

That got me thinking about “steps performed together portraying feelings and thoughts;” “two dancers moving in complete unison, flowing effortlessly to music.” This may define a particular style of ballet, but doesn’t it also describe famous dancing couples – partners who may have performed together once or many times, but every time you watch them, you can see how absolutely in sync they are. These famous dance partnerships perform exquisite duets – or pas de deux — with all the passion and grace that embody their art.

Margot Fonteyn and Rudolph Nureyev may certainly be considered the most-loved and celebrated ballet partnership of all time. Individually, each was worthy of joining the ranks of greats. But when they danced together, magic happened onstage. Nureyev’s youthful, brazen force, and Fonteyn’s refined elegance made their partnership a success from the very beginning.

According to dance.lovetoknow.com, one of the most famous Fonteyn/Nureyev performances is in Romeo and Juliet. In The Balcony Scene you can see how perfectly these two dancers work together. Onstage, they were more like one entity than two separate dancers.

Two of the greatest ballet dancers in New York at the time of their partnership, Mikhail Baryshnikov and Gelsey Kirkland were also exemplary partners. Kirkland, one of the ‘Balanchine ballerinas,’ needed an extremely strong partner for her pas de deux numbers because of her virtuoso talent. Baryshnikov proved able to match her onstage as they were the same size and had the same way of disguising difficulties on stage – they were in perfect harmony in performance. Signature steps: ‘Waltz of the Flowers’ from Baryshnikov’s The Nutcracker.

The website dance.lovetoknow.com includes Suzanne Farrell and George Balanchine in their list of top 10 memorable dance partners. Farrell is one of the most famous ballerinas to pass through the School of American Ballet and join the New York City Ballet during the time of Balanchine and she worked hard to become everything that he was encouraging her to be. It’s been said that in Suzanne, Balanchine saw that certain je ne sais quoi that great ballet masters are always looking for. He instructed her privately to hone her talents beyond simply having perfect technique. Many called her Balanchine’s muse, and he created several parts with her specific flair in mind. She was a beautiful solo dancer, but some of her most breathtaking moments were when she danced with Balanchine himself.

Antoinette Sibley and Anthony Dowell have been referred to as one of the most-famous partnerships in the Royal Ballet’s history. According to ballet.co.uk, “they were so ideally matched, in appearance, line and musicality that their already great individual talents seemed even greater when they appeared together.”

When I think of “two dancers… flowing effortlessly”, I immediately envision Fred Astaire and Ginger Rogers. Often called the “dance darlings of pre-war Hollywood”, Fred and Ginger, perhaps the most famous dancing duo ever paired, made 10 films together, beginning with 1933’s Flying Down to Rio. Their signature steps are featured in: ‘Smoke Gets in Your Eyes’ from the 1935 movie Roberta; their final musical was The Barkley’s of Broadway in 1949.

In the 1950s, musicals began to take off, and it was not only for the exceptional singing. Dancing has been a vital part of musicals throughout their history, and Julie Andrews and Rex Harrison made headlines with their waltz in My Fair Lady. Laced in anticipation of a relationship that is changing, the waltz is full of power. Set on the background of a beautifully costumed ball, in the grandest of ballrooms one can imagine, this dance scene had all the necessary elements to be remembered for decades.

Who can forget 1987’s Dirty Dancing, which took the world by storm. When Patrick Swayze and Jennifer Grey perform the Dirty Dancing Finale to I’ve Had The Time of My Life, the “portraying an expression of feelings and thoughts between two dancers” is so visible and so real.

No doubt you may have your own idea of the perfect dance partnership. Let us know who you think should be included in the list of wonderful duet dancers.

Diane Claytor, a Chicago native, has spent most of her adult life living in the East Bay and working for several different non-profit organizations. Although admittedly not a dance aficionado, she enjoys all types of music and is probably happiest when she’s plugged into her mp3 player listening to whatever the mood dictates. She’s a staunch believer in arts education and is extremely impressed with Diablo Ballet’s PEEK program, ensuring that children of all economic levels have the opportunity to experience the power of dance.