The Spin on Pirouettes – Diablo Ballet’s Mayo Sugano’s Take on the Bravura Step. 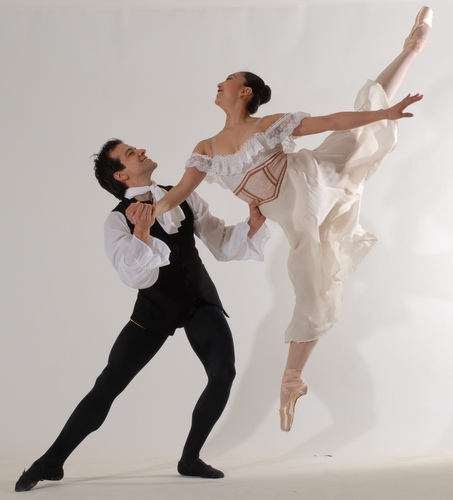 Pirouettes and all their revolving descendants, mesmerize. Like a child watching a top spin, I am drawn to the power of their sublime centrifugal movement. As an adult, they also astound; the strength and precision needed to pull off a perfect pirouette is both obvious and remarkable.

The turns in the coda of a pas de deux make the finale grand and are an opportunity for the dancers to wow us with their technical mastery. One doesn’t have to know anything about dance to feel the need to burst into applause after a ballerina’s thirty two consecutive fouettés, or a male dancer’s multiple grand pirouettes.

This video from “White Nights” is an incredible example of Baryshnikov’s 11 grand pirouettes: http://www.youtube.com/watch?v=02EvsGal-Wc

Then there are many different types of fouetté turns in which the raised foot is whipped (fouette means whipped in French) in front or behind the supporting leg to the opposite direction: http://www.youtube.com/watch?v=-YSKWuWETFU

With a little bit of background on turns, I then asked Diablo Ballet’s Mayo Sugano to give us her take on them.
LF: Have you always liked turning, or have your preference/talents changed during your career?

MS: I only started turning well when I joined Diablo Ballet. I got injured badly (2 herniated discs, a dislocated hip, and pinched nerves) at the end of the 2004 season with San Francisco Ballet, and I had to stop dancing for two years. Honestly, I thought that was the end of my dancing career. I didn’t think I would dance professionally again.

After a year of physical therapy and resting, I started taking Pilates, and then started teaching little by little. And then another year later, I started taking classes from Lupe Feijoo (the mother of SFB’s principal dancer Lorena Feijoo). One day I did quadruple pirouettes. That’s when I found out I could turn! I think the core strengthening and training from Pilates really made me centered. I even discovered, and started to use muscles I had been unable to use for years. That was how I became a turner. Before that, I was always the extension and jump girl, never turns.

LF: How is the power to turn generated? What are the mechanics of a turn?

MS: I was always taught that there are three important things to think about when you turn: Legs, arms, and elevé! You need to coordinate the three and pull them in together. For example, with simple pirouettes, the leg goes up into passé, the arms come in, and the dancer rises into elevé. The position is held when the turn is started. I use this when I am teaching and it works! On top of that, the dancer must think about basic things like pulling up, engaging the core and back muscles, spotting, and of course, a good plié before!

LF: Which turns are the most difficult to perform?

MS: Grand a la seconde turns. It’s just too hard to keep my leg to the side! Fouéttes, on the other hand I love. Fouettés are something I have been able to do well since I was little. My mom, who was my teacher, always made me do them as a child, so they are in my body.

LF: What dictates how many pirouettes will be performed in a sequence: the choreography or the dancer’s ability? Is there any room for impromptu changes during the performance depending on how you are feeling?

MS: Most choreographers will tell you whether to do a single or a double, but beyond that, you are making the decision. For me, if it’s something I am really confident with, I will just go for it and see how many I can pull off during the rehearsals, which will dictate what I will do in the performance.

I want to thank Mayo for sharing her experience so freely. A ballerina turns with such ease and grace that sometimes we forget about the years of work (and sometimes pain) behind those turns.

I will admit to trying a fouetté turn in my living room and nearly dislocating my standing leg knee in the process. The next time I watch Mayo at a Diablo Ballet performance, the perfection of her pirouettes will be all the more remarkable.