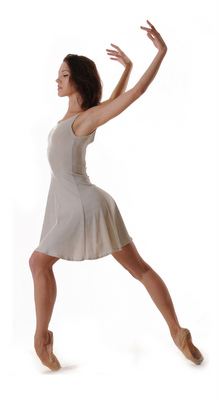 Next week – Nov. 9 to be exact – Diablo Ballet will kick off its very exciting 20th season at Fremont’s Ohlone College’s Smith Center. The following weekend, Nov. 15 and 16, will find the same repertoire: A Swingin’ Holiday, 2013 edition, Our Waltzes Trilogy and Mario Radacovsky’s Compulsive, performed at Walnut Creek’s Lesher Center for the Performing Arts. Diablo Ballet has two new dancers joining the company this anniversary season and we thought you’d like to meet them: Tetyana Martyanov and Justin VanWeest. We’ll start with Tetyana.

When she was almost 16 years old, Ukrainian Tetyana Martyanova said goodbye to her family for the first time, got on a plane for the first time and, with her friend and fellow dancer, Kateryna (Katya) Derechyna, and flew almost 4900 miles to New York. She’s been living on this side of the world ever since.

Born in Odessa, Tetyana started dancing as a very young girl. At 8 years old, she was accepted to dance with the Odessa Ballet Academy, a school for “serious ballet students,” she said. Classes were several hours a day, five days a week. Olga Kresina, a Ukrainian alumna of the Odessa Academy who was living in the U.S., returned to Odessa for a visit. She watched the students dance, aware that she was seeing special talent. With input from their teacher, Elvira Karavaeva, Kresina recommended that both Tetyana and Katya enter the Youth America Grand Prix ballet competition in New York. And it was then that Tetyana’s life completely changed.

Larissa Saveliev, artistic director of the YAGP competitions, said in a 2004 article in Dance Magazine that she “remembers her amazement at the sparseness of what the girls brought with them…one tutu bag and one makeup bag…pointe shoes and an extra pair of jeans, and that’s it.”

That article continued, “The girls’ goals were simply to perform in New York. Tetyana says, ‘I would have felt overwhelmed if I’d thought of it in terms of competition. Dance, to me, is an expression of my inside life, of my feelings. When I’m dancing, I’m trying to inspire people and to give something new to them.’”

Although she didn’t win the competition, she did win a scholarship to the summer program at The Harid Conservatory in Boca Raton, FL, described as “America’s professional training school for gifted young dancers.” A 2007 article in the South Florida Sun Sentinel described the Harid Conservatory summer intensive as “four weeks that function as an on-going audition…American Idol for ballet dancers.” Tetyana easily passed the “audition” and was offered a scholarship to continue at Harid for the full year.

She lived in a dorm. She took high school classes. She took dance classes. And, at 16, she slowly adjusted to this new life. At the time, Tetyana says, she had very little knowledge of the U.S., knew very little English. “It was quite shocking to move to a different continent, learn a different culture and different language, as well as being away from my family,” including her parents and twin sister, she said.

The Harid Conservatory is a very prestigious school for dancers and directors often come searching for new talent. The artistic director of South Carolina’s Columbia Classical Ballet did just that, offering Tetyana a job with his company on the spot.

She spent two years at Columbia Classical Ballet (which, coincidentally, is where Diablo Ballet’s other new dancer, Justin VanWeest, began his dancing career at the same time). “It’s a small company and I was dancing a lot,” Tetyana said. When it was time to move on, she went to Philadelphia, staying with friends and auditioning in New York. Unfortunately, she was having difficulties getting her work visa and although offered a contract with New York’s Cedar Lake Contemporary Ballet, Tetyana wasn’t able to legally work in the U.S. and sadly, had to turn down the contract. She spent two years taking classes, training and doing pick up work before moving on again – this time to Chicago.

Tetyana spent three years in Chicago, dancing with Elements Contemporary Ballet, as well as guesting with several other companies. As much as she loved Chicago, Tetyana started thinking about returning to New York, believing she needed to “try New York before I got too old,” she said. She spent the next several months auditioning, teaching and dancing part time. “It was very hard there,” she said. “It was very expensive, very quick-paced and, with the exception of the large companies, there wasn’t a lot of funding, in spite of the fact that there were so many talented choreographers and dancers.”

A stint with Tania Perez-Salias Compania de Danza, a contemporary company in Mexico City followed, as did two guesting opportunities with Les Grands Ballets Canadiens de Montreal and a considerable amount of travel throughout the U.S. as well as Europe. Growing tired of all the travel, Tetyana came to Northern California to be with her then-boyfriend.

It was here she met Lauren Jonas, Diablo Ballet’s Artistic Director, who asked Tetyana to replace an injured dancer in the company’s spring 2011 performances. Tetyana loved California and thoroughly enjoyed working with Diablo Ballet. But, as luck would have it, she was offered a contract with Les Grands Ballets Canadiens de Montreal. “It was a full contract and, after guesting with them twice, it had been my dream to work with them full time. As a dancer” she said, “you work so hard to get someplace you want to be” and she was very excited to accept their offer. “It was great. We traveled to China, Europe, the Mideast – it was an incredible experience.” And she danced a lot. However, during the second season, Tetyana was injured. After recovering and feeling physically and mentally strong, she felt she wasn’t dancing as much, or getting many partnering opportunities.

In a 2008 interview posted on Russianpointe.com, Tetyana described how much her green card meant to her. When asked what had been her greatest challenge, she replied, “Getting my green card! When I was on a student visa, I could go home every year, but on the work permit I haven’t been able to go home; it’s been four and a half years since I saw my family. When I finally received my green card approval on June 7, 2008, I took the envelope out of my mailbox and just sat in the lobby [without opening it]. I just kept saying ‘please, please, please.’ When I opened it and saw ‘approval’ on the letter I started crying and laughing at the same time. I was the happiest person! Now I’m free to work anywhere, travel and go home to see my beautiful family. So many doors have opened, and I am so grateful for that.”

She wasn’t about to take a chance on losing that freedom. “I just sat down and thought it all through. I realized that I tended to get run down mentally working in a large company – just too much politics, too many insecurities,” Tetyana explained. Another dancer who had left the company told her that if you don’t like the way you’re being treated, you’re better off with a small company where you can be yourself. “I remembered how good it was to dance with Diablo Ballet, how supportive Lauren was. She’s real and honest with her dancers, there’s nothing fake. And that makes a huge difference.”

So she called Lauren. As they say, timing is everything. Diablo Ballet had an opening and Tetyana was offered a contract. She and her fiancé packed up and moved from Montreal to the East Bay. She began rehearsing for Diablo Ballet’s 20th anniversary season and appears to be quite happy now. “As an artist, you’re always searching, looking for things to fulfill you,” Tetyana stated. “I know I moved around a lot and perhaps that’s because I left home so early and hadn’t found a place where I was completely satisfied.”

In the 2008 Russianpointe.com interview, Tetyana said “I see myself working in a smaller contemporary company, not joining the corps of a large company where dancers usually worry about how they look or act.”

At Diablo Ballet, Tetyana noted, “everyone has 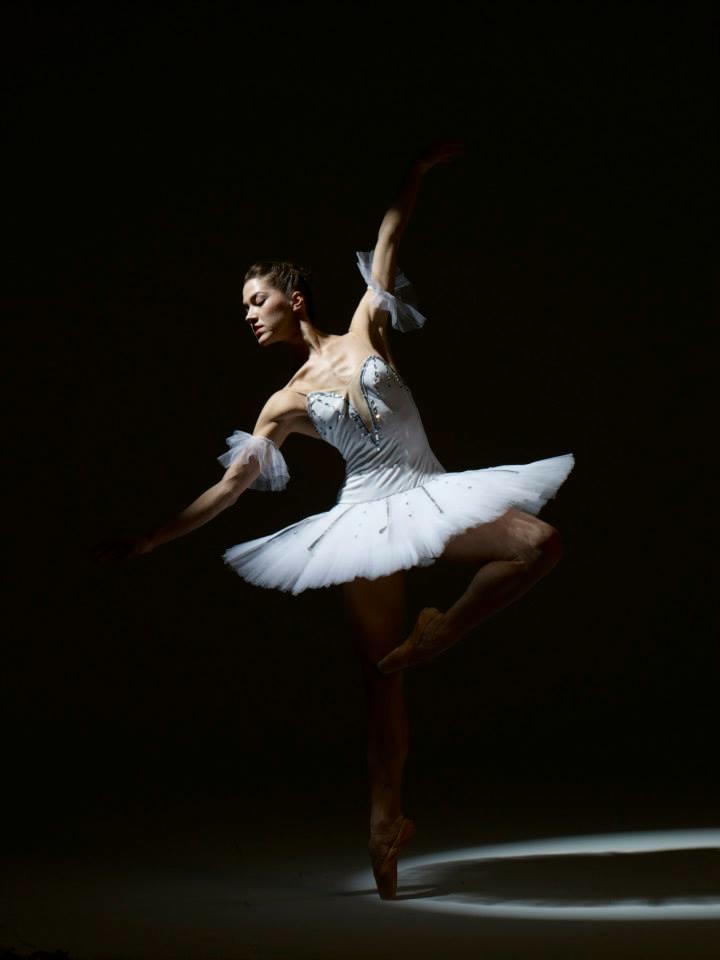 the opportunity to dance a lot and the work is very moving. The company is more like a family, willing to help each other. I’m so happy to be back and really look forward to staying here.”

Tetyana is in the process of applying for her U.S. citizenship. She hopes that once she receives her citizenship, her mother will be able to visit. In the 13 years she has been dancing professionally, no one in her family has ever seen her dance in person. She sends them videos, but because obtaining a visa is so difficult for Ukrainians, that’s the only way they’ve seen her perform. “I dream about the day they can just come to the theater and I’ll be dancing. They’ll be able to see me, I’ll be able to dance for them. I know they’re proud of me but just coming to the theater and seeing your daughter’s name in the program – I think that would be so special for them.”

You can see Tetyana – and the other incredible Diablo Ballet dancers – as they kick off the 20th anniversary season. For ticket information, go to https://diabloballet.org/tickets/.