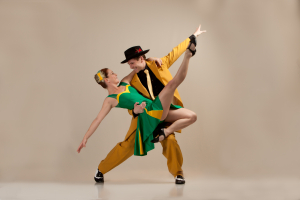 Diablo Ballet kicks off its 21st season (as well as the 2014 holidays) on Friday, November 14th with A Swingin Holiday. This year’s edition of A Swingin’ Holiday (the third annual for Diablo Ballet)

is again staged by Broadway choreographer Sean Kelly,  and set to the music of Duke Ellington, Glenn Miller, and jazzy renditions of Tchaikovsky’s The Nutcracker Suite, all performed live by the Diablo Ballet Swing Orchestra.

It’s doubtful that you have ever thought you’d see one show featuring both ballet and swing dancing. After all, these two dance forms are just about as different as night and day:

• Ballet originated in Renaissance Italy in the 15th and 16th centuries and was developed in France, Russia and England. Swing dancing began in the 1920’s when the Black community in Harlem, NY used African dance moves to create the Lindy Hop to contemporary jazz sounds.

• Ballet, typically performed by companies, is centered on the dancer. It is a more individualistic art form. Swing, which is one of many dance forms that fall under the umbrella of Ballroom Dancing, is always performed by couples.

• Ballet is all about the art and requires considerable discipline in the way dancers must train for years to develop their abilities. Swing, while it absolutely has its own defined steps, is far more improvisational and stylistically flexible.

• Ballet is most often performed to classical music; Swing is performed to modern music, such as jazz and the big band sound.

• Ballet is typically a performance dance, revealing a story and performed in theaters and concert halls. Swing is far more social and you’ll find it in nightclubs, parties and dance halls.

• Ballet dancers typically have upright posture, with arms lifted upward and feet raised on toes; Swing dancers move all parts of the body in an exaggerated manner and typically flatten their feet.

According to ehow.com, “One similarity between the two forms of dance is their popularity. Both attract enthusiastic participants and are practiced worldwide. Furthermore, the skills of ballet and ballroom dancers are similar in some ways. In order to be successful, both require highly developed senses of timing and rhythm, as well as the kinesthetic awareness that allows them to keep track of the movements of other dancers.”

The Beginning of Swing

Ssqq.com states that Swing Dancing “owes its start to Jazz, which is considered to be the only art form to originate in America…It’s partner dancing where the man literally ‘swings’ the lady through a series of dance patterns.” Wikipedia.com says Swing, often called the All Ameri

can Dance, is more commonly known as a group of dances that began in the African-American community with the swinging style of jazz music in the 1920s. The most famous of these dances is the Lindy Hop, which is actually a fusion of many dances, including jazz, tap, breakaway and the Charleston.

Legend has it that in 1927, the Savoy Ballroom in Harlem was a very successful 2-story dance club, with two bandstands and over 10,000 square feet of spring loaded, wooden dance floor. (The floor had to be replaced every three years because of its tremendous use. The Savoy, which became known as the “Home of Happy Feet,” could accommodate 4,000 people, attracted the local Black community as well as the most famous Black bands. One night, a local man named “Shorty George” Snowden was enjoying his evening at the Savoy. A reporter, watching the dancers doing jumps, leaps and somersaults, asked Shorty Georg

e what they were dancing. Shorty George, seeing a newspaper on a nearby table with the headline “Lindy Hops the Atlantic” (a story on the successful flight of Charles Lindbergh), told the reporter they were dancing the Lindy Hop. The name stuck!

In the 1930s, a bouncy six beat variant of the Lindy Hop was named the Jitterbug by band leader, Cab Calloway.

Duke Ellington is actually given credit for naming the Swing Dance style with his hit song, “It Don’t Mean a Thing If You Ain’t Got That Swing.”

Following this, Dean Collins, who had been dancing at the Savoy for many years, moved to Los Angeles and altered the Savoy Swing by adding his own style and movements. Thus was born the West Coast Swing, which was danced to blues, R&B, Pop and Funk music, and is now considered the official dance of California. Collins won numerous dance contests and taught the West Coast Swing to dancers, dance teachers and movie stars; he also choreographed for and danced in several Hollywood films in the 1930s.

Apparently, the first impression of the Lindy Hop, and the Swing movement, was not terribly positive. Dancing societies and dance teachers looked down upon the style, calling it a “degenerated form of jazz whose devotees are the unfortunate victims of economic instability;” older generations thought Swing dancing was too sexual and vulgar.

Diablo Ballet’s choreographer, Sean Kelly, knows both his Ballet and his Swing. After many years dancing with the Houston Ballet, Kelly entered the world of musical theater where he joined the touring cast of the Tony-nominated musical Swing, serving as both a swing dancer and dance captain.

Three years ago, Lauren Jonas, Diablo Ballet’s Artistic Director, approached Kelly, saying she thought it would be fun to create a piece combining holiday music classics played in big band fashion and pairing it with swing-style dancing. Kelly obliged. In 2012, the San Francisco Chronicle said, “what made Swingin Holiday so endearing were the dancers’ clean attacks and lack of self-consciousness in recreating a vital era of social dance history.” Last year, heatherdance.com called the choreography a “wonderful fusion of styles (ballet, jive, social dance, jazz)…”

For your chance to watch Diablo Ballet’s dancers perform both ballet and swing, all in one evening, get your tickets by going to www.krissyg.sg-host.com or calling 925-943-7469.