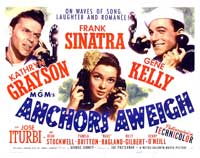 San Francisco Bay Area movie buffs – and those who love to watch extraordinary dancing – have the special opportunity to sit back, relax and relish in the days of yore. When movies were movies, as my father used to say, and didn’t cost billions of dollars to produce. That’s because the Dance on Film series – the very popular collaboration between Diablo Ballet and the Lafayette Library – is back for the 4th consecutive year. This year’s showings will really take viewers back – in fact, most of us weren’t around when these movies made their debut. Maybe you’ve never even seen them (although no doubt you’ve heard of them). But that won’t stop you from dancing in the aisles and whistling those familiar tunes as you leave the library.

On Wednesday, June 17, you’ll have the opportunity to see a very young and very dapper Gene Kelly alongside an even younger and very handsome Frank Sinatra as they play two sailors on leave in Anchors Aweigh, a 1945 musical comedy directed by George Sidney. According to Wikipedia, it was the first of “three buddy pictures teaming the cocky dancing Kelly with the (against type) shy singing Sinatra.” (The other two were Take Me Out to the Ballgame and On the Town, both in 1949.) 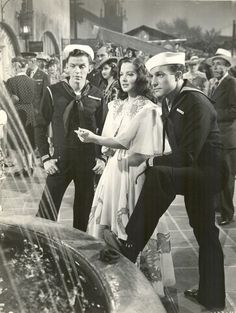 Also starring Kathryn Grayson, the movie won the Academy Award for Best Musical Some of the more familiar songs featured in Anchors Aweigh include the title song, “If You Knew Susie” and “I Fall in Love Too Easily.” The picture was also nominated for Best Actor in a Leading Role (Gene Kelly), Best Cinematography, Best Music, Best Song (for Jule Styne (music) and Sammy Cahn (lyrics) for “I Fall in Love Too Easily”) and Best Picture.

The movie is famous for a musical number where Gene Kelly dances seamlessly with the animated Jerry Mouse. Originally, Wikipedia says, the producers wanted to use Mickey Mouse for this segment. Some sources claim Walt 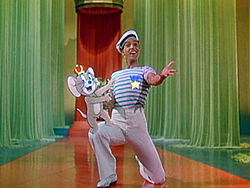 Disney initially agreed to loan out Mickey, but Roy Disney rejected the deal. According to Thomas’ book on Roy Disney, the studio was in debt after World War II and they were focusing on trying to get their own films out on time. According to Roy, they had no business making cartoons for other people.

Anchors Aweigh was made on a budget of $2.58 million. (Compare that to the budget for the recently released Pitch Perfect 2, which was $29 million!)

A review in the July 20, 1945 issue of the New York Times calls Anchors Aweigh a “humdinger of a musical” where “that agile young fellow, Gene Kelly…proves himself to be the peer, if not the superior…of Fred Astaire.” The reviewer refers to Kelly as a marvel of the piece, “dancing, singing and performing in a delightfully…graceful style,” while Sinatra contributes to the “general fun and youthful charm of the show.”

Inserting a local connection, long-time Moraga resident and local actress, Kathy Ferber’s mother, Pamela Britton, had a feature role in the movie, playing the Girl from Brooklyn. Kathy will be joining us at the Library, sharing photos from the making of the movie that her mother gave her. She will also offer up some fun facts that her mother had shared.

On Wednesday, July 14, you can go back another 10 years to 1935’s Top Hat, starring the incomparable Fred Astaire and Ginger Rogers (watch carefully and you’ll see Lucille Ball in a bit part as the flower shop clerk). Two of the songs, all written by Irving Berlin — “Top Hat, White Tie and Tails” and “Cheek to Cheek” – have become American song classics. Wikipedia says that “Top Hat was the most successful picture of Astaire and Rogers’ partnership (and Astaire’s second most successful picture after 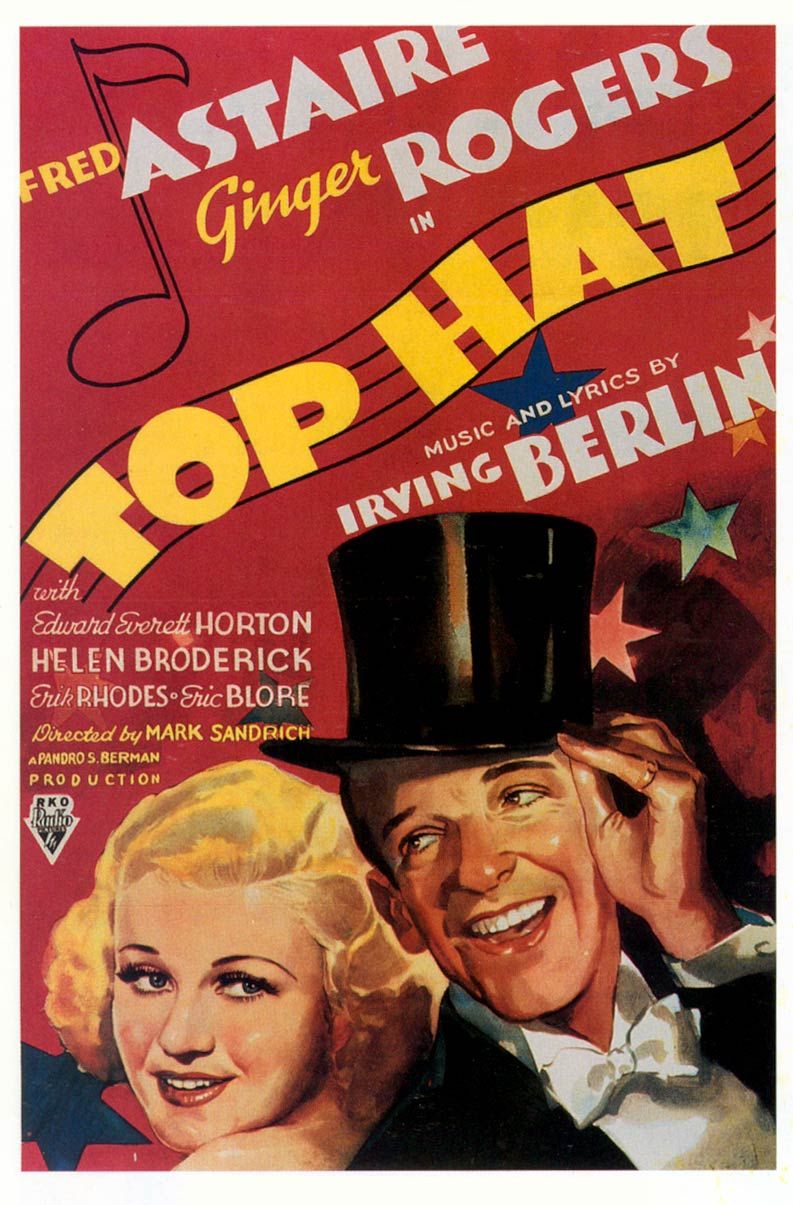 Easter Parade), achieving second place in worldwide box-office receipts for 1935.” Astaire’s tap solo in “Top Hat, White Tie and Tails” is often referred to as his most celebrated.

The film was nominated for the Best Picture Academy Award, as well as for Art Direction and Original Song (Irving Berlin for “Cheek to Cheek”). In 1990, Top Hat was selected for preservation in the US National Film Registry by the Library of Congress as being “culturally, historically, or aesthetically significant”. The film ranked number 15 on the 2006American Film Institute’s list of best musicals.

According to filmsite.org, Top Hat is “one of the great 30s dance musicals, and possibly the best, most characteristic and most profitable Astaire and Rogers musical ever, with wonderful, magical dance and song numbers (with straight-on, full-length views of the dancers without a lot of camera cuts or unusual camera angles). “

In 2005, film critic Roger Ebert wrote, “There are two numbers in Top Hat where the dancing on the screen reaches such perfection as is attainable. They are by Fred Astaire and Ginger Rogers for ‘Isn’t This a Lovely Day?’ and ‘Cheek to Cheek.’ Because Astaire believed that movie dance numbers should be shot in unbroken takes that ran as long as possible, what they perform is an achievement in endurance as well as artistry. At a point when many dancers would be gasping for breath, Astaire and Rogers are smiling easily, heedlessly. To watch them is to see hard work elevated to effortless joy: The work of two dancers who know they can do no better than this, and that no one else can do as well.” 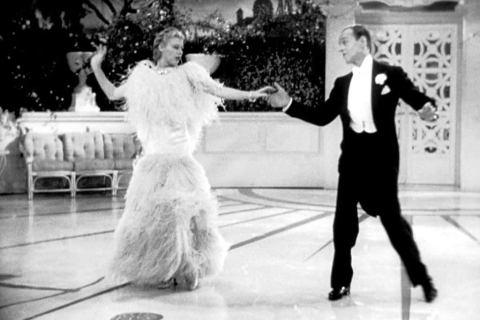 Rottentomatoes.com says, “Top Hat is one of the finest musicals starring Fred Astaire and Ginger Rogers…the comedic dialogue is sharp, the performances are wonderful, Irving Berlin’s music is splendid, and the dance numbers are simply stunning.” And the August 30, 1935 review in the New York Times said, “When Top Hat is letting Mr. Astaire perform his incomparable magic or teaming him with the increasingly dexterous Miss Rogers it is providing the most urbane fun that you will find anywhere on the screen.”
Both movies – Anchors Aweigh on June 17 and Top Hat on July 14 – will be shown at the Lafayette Library & Learning Center starting at 6:30. Each evening is preceded by a brief presentation by Diablo Ballet’s Artistic Director, Lauren Jonas, and PEEK Associate Director, Edward Stegge, who will regale attendees with behind the scenes facts about the movies and offer a dancers’ perspective.

These are evenings not to be missed if you live in the area. And if you’re reading this from afar, well, you can no doubt rent these wonderful movies so you, too, can spend an evening clapping your hands and humming along.