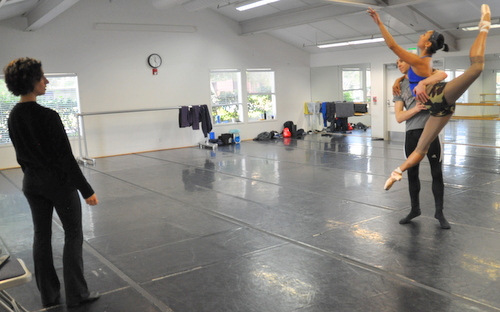 When you come to Walnut Creek’s Shadelands Art Center Auditorium on either January 31st or February 1st to enjoy Diablo Ballet’s latest performance, Emotions Into Movement, you’ll be mesmerized by the four beautiful dance works being presented:

End of Time – An ethereal Pas de Deux by award-winning choreographer Ben Stevenson, set to Rachmaninoff’s Cello Sonata in G minor
AnOther – Resident Choreographer Robert Dekkers reminds us that every moment is precious in his exploration of the evolution and joy of relationships, set to the music of Yann Tiersen.
Resistance by Diablo Ballet’s David Fonnegra
And…
Esmeralda Pas de Deux – A bravura dance performed to the lively score by Cesare Pugni

Esmeralda Pas de Deux is from La Esmeralda, a three-act dramatic ballet based on Victor Hugo’s novel, Notre-Dame de Paris. It was originally choreographed by Jules Perrot for his wife Carlotta Grisi and premiered in 1844 in London. Marius Petipa gave it a new staging in 1869, with numerous alterations and additional music by Riccardo Drigo.

Berman is a long-time friend of Diablo Ballet’s Artistic Director, Lauren Jonas. They grew up together in San Rafael, both taking ballet classes at Marin Ballet. “We were the kind of friends that wrote notes to each other during high school French class,” Berman said with a chuckle.

When she was a high school senior, Berman went to train with the San Francisco Ballet, under then artistic director Michael Smuin. And that’s where she stayed for the next 19 years, 14 of those as principal dancer. She starred in “Giselle,” “Swan Lake,” “Sleeping Beauty” and “Romeo and Juliet,” as well as works by George Balanchine and Jerome Robbins. She traveled the world with the company, performing everywhere from Covent Garden to the Paris Opera. The San Francisco Chronicle once described Berman the dancer as having an “acute sense of drama… articulation of movement…and transparent joy in dancing.”

In 2002, Berman decided it was time to start a family. So she retired. A year later, “almost exactly to the date of my retirement,” Berman said, her twin boys were born. And a year after that, Berman started working again, this time as a ballet teacher, ballet mistress, and regisseur, assisting choreographers in bringing their existing ballets to new audiences. And she loves this new role.

In an interview with the San Francisco Chronicle upon her retirement, she talked about the possibility of taking on this position. “It’s the post-dancing job I’ve always wanted. I’ll still have the thrill of the dance — but without the pain! And the sense of community, of being a part of something where a group is working toward a common goal,” she said back in 2002.

In 2012, Berman told the California Literary Review that “Being a regisseur resonates almost as much as dancing for me. I love it… it doesn’t have the same pressures as being a performer. I still get to interact with dancers and use my body.”

“What I love about this work is really getting a sense from the choreographer what he/she wants,” Berman recently told me. “What are they trying to express through their piece and how can I help achieve that.” Some choreographers allow more freedom than others, she noted. “Some say they don’t care if the pirouette is on count 4 or 5, they just want it to be honest, look like the dancer is living it,” Berman said. Others, she explained, are extremely particular, not wanting any interpretation.

But what about all those ballets choreographed hundreds of years ago?

The Esmeralda Pas de Deux falls into this category. “A classical ballet dancer knows Esmeralda,” Berman said. And even though she hasn’t performed this particular work, “I’ve danced enough classical ballets, been coached by enough great coaches and have enough of an eye to coach this classical variation,” she noted. “A lot of what you’re doing is your own eye, watching and tweaking and polishing and a lot is also passing along information that I was given when I was being coached on a classical variation.”

According to Berman, this is definitely a profession of passing down, especially with the classics. “Now you can watch YouTube and see a performance of just about anything. But we didn’t have that. It was always a real person teaching you the dances. And,” she said, “I’ve seen Esmeralda performed a gazillion times. It’s within the realm of classical ballet and there are certain goals to achieve when performing a classical piece: how it should look, how it should feel.” She did, however, admit to watching a performance on YouTube. “I thought it would be fun to see it again for a little inspiration.”

Diablo Ballet dancers Mayo Sugano and Robert Dekkers are performing the Esmeralda Pas de Deux and, Berman said, “it’s in their ballet consciousness. They know what to do.” Berman says her role is that of a coach, “tweaking and refining.”

“This dance is so fiery,” she said. “It really allows a lot of room for the dancers to show their personalities. It’s flirtatious, strong, thrilling and exuberant and frankly, kinda’ sexy. It’s as fun as classical ballet gets,” she said when asked to describe it.

She also loves working with Diablo Ballet. “The dancers are really fabulous. They’re mature artists who are grateful to be able to do this. They understand what a gift it is.”

In addition to working with Diablo Ballet, Berman has set pieces for both Mark Morris and Christopher Wheeldon. She also teaches classes at San Francisco Ballet and, in conjunction with Alonzo King’s LINES Ballet School, is on the faculty in the Fine Arts Department of Dominican College in San Rafael. Additionally, she teaches open ballet at San Francisco’s City Ballet School. And, of course, she has those active 10 year old twin boys waiting for her at home.

If you haven’t gotten your tickets for Emotions Into Movement, it certainly isn’t too late:  Friday, Jan. 31 at 8pm, or Saturday, Feb. 1 at 2pm & 8pm. Call 877-938-9240 or go to https://diabloballet.org/tickets/. Joanna Berman will be a celebrity guest moderator at the January 31 performance. This is definitely a show you’ll want to see!